What Happens During Beer Fermentation? 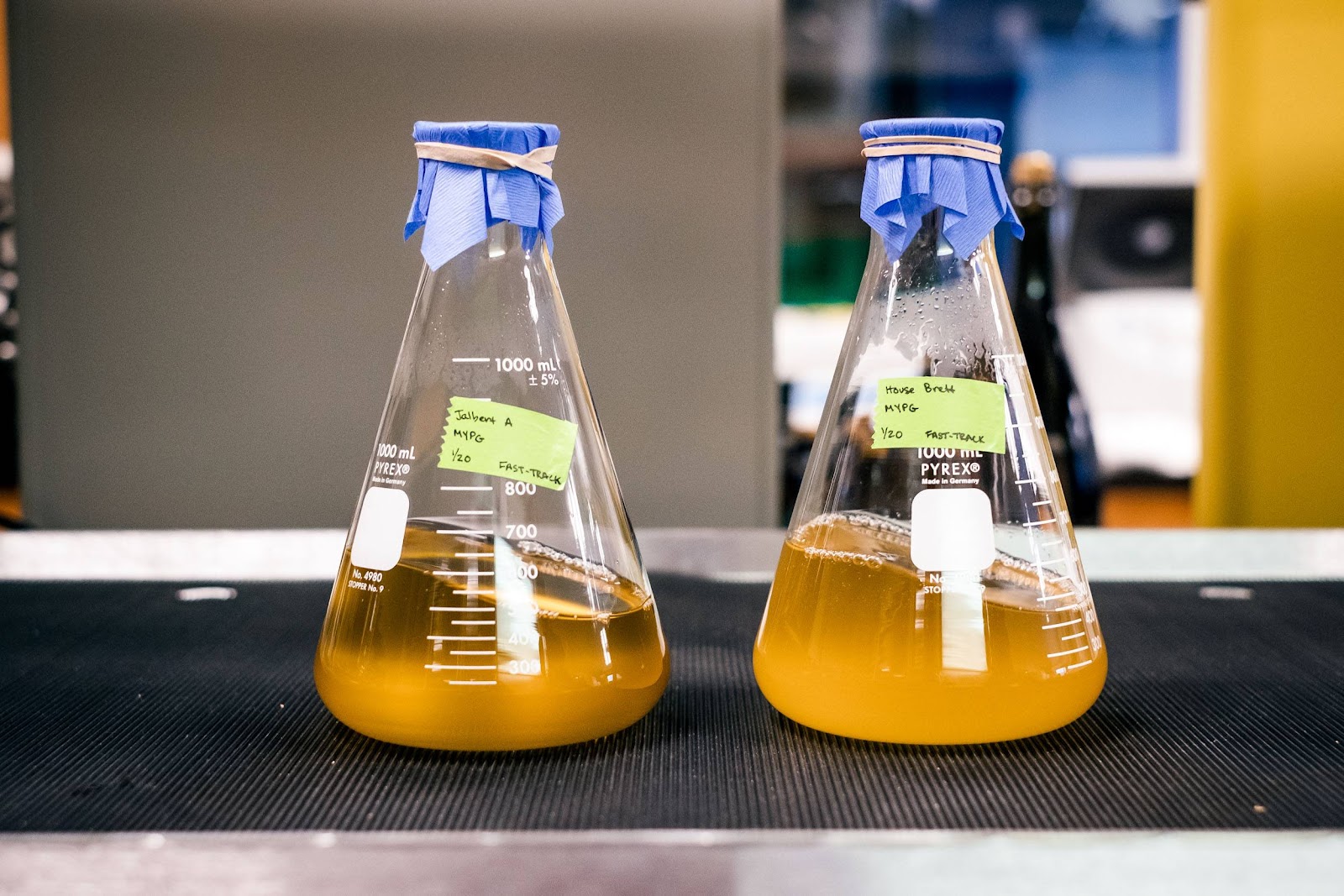 Temperature is one of the most important factors in the fermentation of beer. Yeasts can thrive or die depending on the temperature. High temperatures can suppress the growth of yeasts and can contribute to off flavors. In addition, high temperatures can increase ethanol production. Fermentation is typically carried out between 48 and 58 degrees Fahrenheit.

Beer fermentation temperatures can vary greatly and have a dramatic impact on the final taste of your beer. The first 12 hours of fermentation are particularly sensitive to temperature. A drastic temperature change during that period can cause yeasts to drop out of suspension and lose their nutrients. The wort must be properly oxygenated and a consistent temperature should be maintained to keep yeasts healthy.

Yeasts differ in their ability to ferment beer. If temperature is too high, enzymes are denatured, preventing the process from continuing. High temperature also activates particles that disrupt the fermentation process.

Yeasts used in beer fermentation have various properties and can ferment a variety of different sugars. They are able to survive in a wide range of pH conditions and can tolerate an acidic environment. They can be divided into two groups: saccharomyces and non-Saccharomyces. The former are rounded and ellipsoidal, while the latter are oval. The main characteristics of beer yeasts include their ability to ferment sugar and produce ethanol and carbon dioxide, as well as fruity esters. They are also able to excrete various chemicals, such as organic acids, sulfur volatiles, and fusel type alcohols.

While traditional ales and lagers are produced with a single strain of yeast, sour beers require different strains of yeast. These sour beers have a distinct sour flavor that is typically not found in a standard beer. The sour character of Belgian lambic, for example, is due to the presence of special yeast.

Ale yeasts, like the saccharomyces cerevisiae species, rise to the top of the fermented beer. These fungi create the carbonation and alcohol in beer. They prefer warmer temperatures to ferment, so most ale yeasts prefer temperatures between 50 and 70degF, while some saison yeasts can reach 90 degrees at their peak. They are responsible for a wide variety of beer styles.

Depending on the style of beer, each strain plays a key role. For example, Belgian yeast is required for Dubbel, Tripel, and Witbier. These yeasts also add a light, fruity note to American and British ales. In Belgium, Brettanomyces and Lactobacillus bacteria are important for Lambic and Flanders Red Ale, while Pediococcus creates a sharp acidic taste in lagers.

Natural wort convection during beer fermentation is a process of gas bubbles rising through the wort. It can be accomplished through the use of an internal boiler, or by pumping wort to an external boiler. The internal boiler is a hollow, heated tube. It can be designed with a baffle to channel rising gas bubbles and redistribute them over the liquid-air interface. This process can reduce the thickness of the foam and allow the beer to evaporate more easily.

Aerating cold topping-up water is another method of improving overall aeration. This is due to the fact that cold liquids hold more gas than warm ones. It is therefore best to add cold water to a fermenter first, and hot wort slowly. It is important to stir the wort as it is added to avoid cracking the carboy.

Beer is generally brewed with top-fermenting yeasts, or those from the Saccharomyces Cerevisiae family. They generally ferment at temperatures of 30-40 degrees Celsius and produce a beer with rich flavor compounds. While this process can make a beer a bit bitter, it also helps the yeast to oxidize unwanted proteins and carbohydrates into fermentable sugars. A variety of temperatures are used during the brewing process, and different temperatures optimize the activities of the yeast.

Another important step in beer fermentation is the use of a clear fermenter. This method makes the beer visible and allows the fermenter to be monitored. A fermenter that has no airlock activity, or is not airtight, allows the beer to undergo a lag phase, when the yeast cells are waking up and are exposed to air.

Yeast is one of the key byproducts of beer fermentation. Much of it is used for animal feed and other food products. Some cultures process this yeast into a thick paste, which is then filtered to remove insoluble material. The result is a product called Vegemite, a smooth local delicacy.

Beer brewing byproducts are rich in nutrients and functional components. The majority of them are used for animal feed or as fertilizers. However, only limited studies have been performed on their physiological properties in humans. For instance, SY is believed to inhibit the growth and proliferation of cancer cells, but more research is needed to confirm this.

The production of these compounds depends on the type of yeast used for brewing. Yeast breweries use two types of yeast for brewing, namely S. cerevisiae and S. pastorianus. The latter has a higher concentration of volatile alcohols, and is a contributor to beer aroma and flavor.

Yeasts are naturally occurring organisms that can ferment a variety of sugars. Some yeasts can even tolerate high pH levels. They are also widely used for the production of numerous other products, including biofuel and wastewater treatment. Some strains are also used for brewing wine. These yeasts are responsible for the complexity of wine and beer.

Flesen can be brewed in two ways: using the kroon-kurk or the hermetische kurk. These produce a gaseous byproduct called bezinksel. This bezink is then placed into the ziel of the fles.

See-through fermenters for beer fermentation offer several advantages over traditional fermenters. One of the biggest benefits is the ability to see the progress of the fermentation process without having to open the fermenter lid. Additionally, they can be more sanitary than other styles of fermenters. A downside to see-through fermenters is the chance of introducing contaminants, especially if you’re not careful. Also, they can disturb the trub and krauesen, resulting in a lower-quality beer.

See-through fermenters for beer fermentation can change the fermentation process significantly. They let you see the progress of the fermentation process, which is an important factor for your beer. An open fermenter will also expose your beer to the air. This can create a lag period, during which the yeast cells begin to activate and produce alcohol. If you don’t want to expose your beer to this lag phase, you can add fining agents to the primary fermenter. After a while, your beer should become clear and you can transfer it to a secondary vessel.

Plastic carboys are another option. They are inexpensive, easy to use, and have a spigot to make transfer easier. They are also a great choice for long-term aging. They also tend to be scratch-resistant, reducing the risk of infection from surface scratches. Another downside of see-through fermenters is that they are not as easy to transport and can break easily.

Hops are a major ingredient in beer fermentation. They are also very expensive. Their cultivation and usage have tripled in the last 10 years, largely due to increasing consumer demand. In addition, hops require large quantities of natural resources. For example, 100 billion liters of water are required to grow hops domestically, and it requires significant infrastructure to deliver the water from the source to the farm. Furthermore, hops can vary greatly in their essential oils, which makes it difficult to achieve a consistent hoppy flavor in beer.

Hops are cone-shaped perennial plants that contribute bitterness, aroma, and preservative properties to beer. Because of this, brewers use different types of hops to achieve different characteristics in their beer. Some varieties are used for bittering, while others are prized for their aroma and flavor. Hops are found in all types of beer, but the specific varieties used for specific types will differ depending on the method of fermentation and other factors.

There are several processes that occur during beer brewing. Among these processes are fermentation, yeast, and sugar. This article will discuss fermentation as well as sugar and finings. These steps